5 Bay Area arts and entertainment events to check out this week, Aug. 23-29 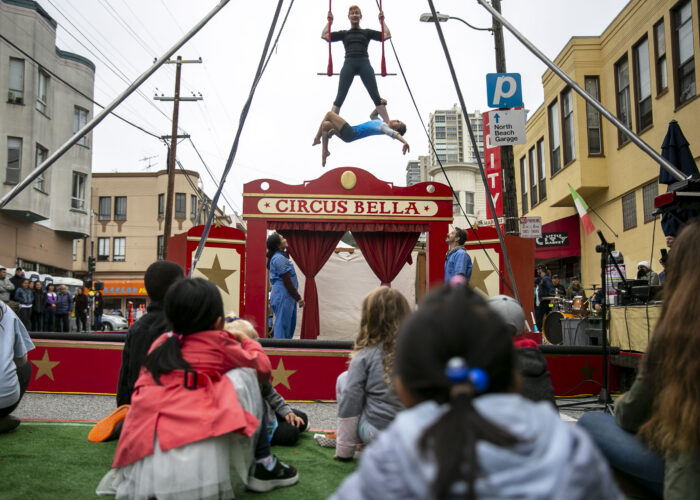 The Chronicle’s guide to notable arts and entertainment happenings in the Bay Area.

After decades of concentrating almost exclusively on the music of the 18th and 19th centuries, Philharmonia Baroque Orchestra & Chorale is taking on larger and more ambitious projects with each passing month. One of the group’s more stylistically diverse undertakings is the upcoming world premiere of “The No One’s Rose,” a theatrical-dance hybrid commissioned from composer Matthew Aucoin.

Setting the poetry of Paul Celan, Aucoin’s score invokes a range of references from Bach to Sam Cooke. In a production co-presented by the American Modern Opera Company and Stanford Live, Aucoin will conduct an all-star cast including Julia Bullock, Anthony Roth Costanzo, Paul Appleby and Davóne Tines, under the direction of Zack Winokur.

The contortionists, jugglers, trapeze artists, clowns and tumblers of Circus Bella exude a plucky, can-do spirit. As they tour their free, one-ring show to different Bay Area parks each summer, they seem to be able to conjure magic from nothing. Pop in, open a trunk and a circus comes out — a bit like a game of make-believe.

It’s a lot more complicated than that, of course, but the 13-year-old company co-founded by San Francisco native and Pickle Family Circus alum Abigail Munn makes the art form feel homespun, like an invitation to play.

“Humorous,” its latest outdoor show, features an aerialist, a unicyclist, a “strong man” and a chair stacker, among others, all accompanied by a live band led by Rob Reich. The come-as-you-are, unticketed, 60-minute piece has early showtimes, which makes it a great option for families.

Venue, cocktail menu and magic tricks all part of Kevin Blake’s ‘The Illusionist’

Just finding and entering the venue for Kevin Blake’s magic show, “The Illusionist at the Palace Theater,” is part of an evening of wonder. Staged at the same place as the long-running immersive show “The Speakeasy,” the show asks audiences to enter through a false front — a supposed Joe’s Clock Shop — that, through secret passages, reveals a 1920s cabaret stage.

Also true to the venue’s last inhabitant, “The Illusionist at the Palace Theater” offers a cocktail pairing menu by 2011 Chronicle Bar Star Carlo Splendorini, with drinks designed to look like magic tricks themselves.

Blake himself, all wordplay and tongue-twisters and winsome self-deprecating jokes in his patter, has a true showman’s imagination and flair. In one past effect, he borrowed a diamond ring from a judge on “America’s Got Talent,” let it fly away with a bunch of balloons and then somehow recovered it in a wrapped, locked box.

Two choreographers, debating and interrupting one another in real time

By the time most performances hit the stage, they’ve had the wrinkles ironed out of them. What civilians don’t often get to witness is the artistic give-and-take that gets things to that point.

For the 11th iteration of its “Sketch” series, the innovative dance company Amy Seiwert’s Imagery will focus on the constructive process by which collaborators help each other out. The title is “Interrupted,” and choreographers Seiwert and Ben Needham-Wood promised to exchange feedback during the creation of new work. Dancers from the company, including Shania Rasmussen, will execute the works in progress.

A famous scene in the 1967 film “The Graduate,” in which a man takes Benjamin (Dustin Hoffman) aside at a party and offers him the career advice “Just one word … Plastics,” reads much different in 2021, now that we know the environmental cost our dependence on the material has yielded. A new exhibition at Rena Bransten Gallery takes that quote as an ironic title, as it explores themes of ecological heroism.

Work by artists including Chip Lord, Vik Muniz, Mansur Nurullah, Aaron Siskind, Mark Dion, Guillermo Galindo and William T. Wiley focus on environmental subjects, such as transcending materiality and principles of transformation, waste and reuse. Among the more startling statements are Susan Middleton’s “Albatross Stomach Contents,” which shows a collection of items that could wash on the shore of a beach organized by theme in a circle: a reminder of where plastic and other litter sometimes end up.

A similar idea is explored in Tony Cragg’s “Palette” with plastic detritus arranged in the shape of an artist’s palette by color. Richard Lang and Judith Selby Lang’s “Shovel Bands” perhaps best exemplifies how several of the works in the show at first seem whimsical or beautiful in their artificiality. But as you get closer, you realize the pops of color are not flowers or some sculptural element: They are the type of plastic bands that litter many beaches today, waiting to pierce your feet and choke wildlife.

The exhibition will be accompanied by a small shop of zero-waste, ecologically sound, common household goods.

For more Datebook Picks and to browse our events calendar, click here.