At least 46 dead as remnants of Ida sweep across U.S. East Coast 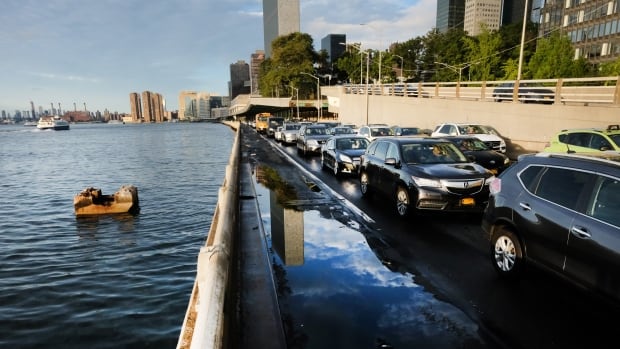 A stunned U.S. East Coast woke up Thursday to a rising death toll, surging rivers and destruction from the remnants of Hurricane Ida, which walloped the region with record-breaking rain days after one of the strongest U.S. hurricanes on record hit the Gulf Coast.

In a region that hadn’t expected a serious blow from the no-longer-hurricane, the storm killed at least 46 people from Maryland to New York on Wednesday night — including 23 in New Jersey alone — as basement apartments suddenly filled with water, rivers and creeks swelled to record levels and roadways turned into car-swallowing canals.

Deborah Torres, who lives on the first floor of a building where three people died in a basement apartment in New York City’s Queens borough, said water rapidly filled her first-floor apartment to her knees as her landlord frantically urged her neighbours below — who had a baby — to get out, she said. But the water was rushing in so strongly that she said she figured they weren’t able to open the door.

“I have no words,” she said. “How can something like this happen?”

The National Weather Service said the ferocious storm also spawned at least 10 tornadoes from Maryland to Massachusetts, including a twister with winds up to 241 km/h that splintered homes and toppled silos in Mullica Hill, N.J., south of Philadelphia.

“It just came through and ripped,” said resident Jeanine Zubrzycki, 33, who hid in her basement with her three children as their house shook and lights flickered.

Scranton, Pa., saw its “wettest day on record,” according to the governor’s office, which also noted that Harrisburg and Altoona had their third-wettest days, and several waterways in southeastern Pennsylvania set records for flooding.

In New York, nearly 500 vehicles were abandoned on flooded highways, garbage bobbed in streaming streets and water cascaded into the city’s subway tunnels, trapping at least 17 trains and disrupting service all day. Videos online showed riders standing on seats in swamped cars. All were safely evacuated, with police aiding 835 riders and scores of people elsewhere, including a 94-year-old man on a highway, Harrison said.

Thursday morning, the nation’s largest city was slow to recover from catastrophic flooding that was reminiscent of Superstorm Sandy in 2012.

The National Weather Service recorded more than 8.9 centimetres of rain in New York’s Central Park in one hour Wednesday night, far surpassing the more than 4.9 centimetres that fell in one hour during Henri on the night of Aug. 21, which was believed at the time to be the most ever recorded in the park. Scientists have warned such weather extremes will be more common with man-made climate change.

“We did not know that between 8:50 and 9:50 p.m. last night, that the heavens would literally open up and bring Niagara Falls level of water to the streets of New York,” said Hochul, who became governor last week after the resignation of Andrew Cuomo.

See what it looks like on the ground after massive rainfall:

The rain in the tri-state area ended by daybreak Thursday as rescuers searched for more stranded people and braced to potentially find more bodies.

City officials banned travel for all but emergency vehicles until early Thursday and warned against unnecessary travel into the morning.

FDR Drive in Manhattan and the Bronx River Parkway were under water during the storm. Garbage bobbed in the water rushing down streets. Some subway and rail service had resumed Thursday morning.

Subway stations and roads have been deluged with a dangerous amount of water as the remnants of Hurricane Ida pushed on through northeastern U.S. states. (Credit: Reuters/Mike Segar) 1:00

Neighbours described hearing screaming from the complex at about 11 p.m. local time as water flowed down the street, pushing dumpsters and cars around.

“Sandy had nothing on this,” resident Jennifer Vilchez said, referring to the 2012 superstorm.

In Passaic, N.J., a 70-year-old man was swept away after his family was rescued from their car.

Rescues took place all over New York City as its 8.8 million people saw much worse flooding than they did during Henri, which was followed by two weeks of wild and sometimes deadly weather across the nation.

Wildfires are threatening Lake Tahoe, Tropical Storm Henri struck the northeast U.S. and Ida struck Louisiana as the fifth-strongest storm to ever hit the U.S. mainland, leaving one million people without power.

A flash flood warning continued into Thursday in New England. Authorities used boats to rescue 18 people from a flooded neighbourhood in Plainville, Conn., and 15 people — including one who uses a wheelchair — from a flooded complex in North Kingstown, R.I. A road in Portsmouth, R.I., crumbled.

The Atlantic hurricane season is far from over.

Larry became a hurricane Thursday morning and was forecast to rapidly intensify into a potentially catastrophic Category 4 storm by Sunday. The National Hurricane Center in Miami said the storm is moving west but remains far from any coast.