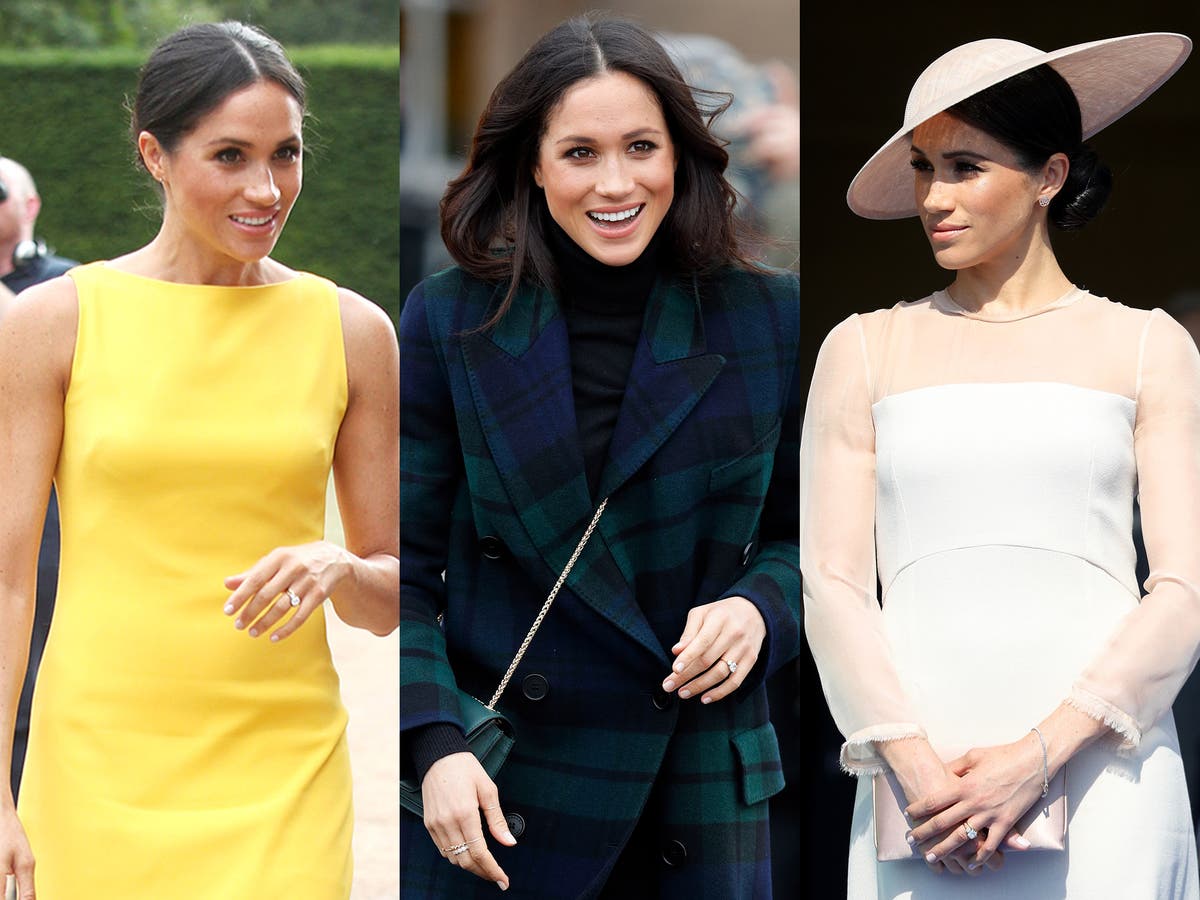 The Duchess of Sussex has made a significant mark in the fashion industry with her sartorial choices for several years.

Ever since the announcement of her engagement to Prince Harry in November 2017, royal fans, shoppers, buyers and designers regularly wait in anticipation to find out what Meghan will wear for a public appearance.

The duchess has shown her devotion to a select number of fashion houses over the years, wearing designs by the likes of Brandon Maxwell, Roland Mouret, Dior and House of Nonie.

The “Meghan effect” – the royal’s influence on the public’s shopping habits – has resulted in websites selling out of designs in seconds, months-long waiting lists for lesser known brands such as Hiut Denim, and copycat designs produced in hours appearing online after her wearing a certain look.

That said, the Californian-born star has also championed the British high street, wearing affordable looks by Marks and Spencer, Reiss, and H&M and supporting emerging independent labels, such as the shirt brand, With Nothing Underneath.

Of course, no brand is held in as high regard as Givenchy is for the royal. In May 2018, the duchess wore a white midi-length-sleeved dress with a boat-cut neckline designed by the French fashion house’s creative director, Clare Waight Keller, for her royal wedding to Prince Harry.

In the months that followed, the mother-of-one turned to the luxury brand on several occasions for appearances including her first solo outing with the Queen Elizabeth II, and visits to Royal Ascot and the Royal Academy of Arts.

For Meghan’s bombshell interview with Oprah Winfrey, she wore a black belted silk dress from Armani that retails for $4,700 (£3,300).

The duchess was pregnant with her second child, Lilibet Diana Mountbatten Windsor, at the time.

The proud feminist was photographed arriving at King’s College London to sit down for a panel discussion about feminism craddling her bump. The dress, designed by high street brand Reiss, featured a black and white pattern which was layered with a plain black suit jacket.

Wearing a white Calvin Klein dress, the royal arrived at The Wider Earth’s charity performance in London in February 2019 with her husband. The looked was paired with a matching-coloured Amanda Wakeley coat.

Delivering an emotional speech at the closing ceremony for the Invictus Games in Sydney in October 2018, the royal wore an olive green Antonio Berardi tuxedo dress and a pair of Aquazzura cream-coloured heels.

During her trip to Tonga in 2018, Meghan wore a cotton green and white striped dress from Martin Grant’s SS19 resort collection. The look was teamed with a pair of suede green heels and a Prada cluch bag.

The duchess sported an ethereal number for her visit to the Australian Geographic Society Awards in October 2018 during her royal tour of the country. The dress was designed by Oscar de la Renta fashion house and is called the ‘Scribble’. The two-tone black and white design features small embellished depictions of swallows that cascade down the tulle overskirt.

Holding hands with her husband Prince Harry at the royal residence in Tonga, the duchess wore a floor-length white gown by New York designer Theia. Embellished with diamante detailing on the shoulders, the dress was styled with an aquamarine ring which was presumed to be the same design the royal wore to her wedding reception in May earlier that year. The outfit was also accessorised with a pair of Aquazurra heels and a Givenchy clutch bag.

University of the South Pacific, October 2018

An unusually-bright coloured option for a royal, Meghan’s dress – named the Frederica – was designed by Figue which is a brand inspired by travel. The boho, floral wrap design was styled with a pair of black espadrilles and a cream and black woven clutch bag.

The royal posed at the Grand Pacific Hotel in Suva, Fiji dressed in a Ginkgo cape dress in baby blue by London-based fashion brand Safiyaa.

For her first official visit to Sussex, Meghan decided to go for a one-coloured ensemble featuring an &Other Stories green silk shirt, a midi-length green leather skirt by Boss and cream-coloured heels. She accessorised the autumnal look with a Gabriela Hearst satin tote bag and her hair pinned back in a low chignon.

For her first solo outing as a royal, Meghan chose to wear an all-black outfit. The royal accessorised a long-sleeved Givenchy dress with a pair of sling-back Aquazzura heeled pumps and a Givenchy satin clutch bag.

Looking chic dressed in an all-black suit by Altuzarra, the duchess smiled as she arrived at the charity function. The mother-of-one paired the demure outfit with a black Deitas camisole top, a black clutch bag and heels.

The royal looked sophisticated in pink for her visit to the Southbank Centre in London, England in July 2018. For the visit, the royal decided to go for an all-pink look comprising of a sleeveless trench by Canadian brand House of Nonie and a matching-coloured shoulder bag designed by Mulberry.

Meghan shone like the sun in this bright yellow Brandon Maxwell dress for her attendance at a Commonwealth Youth event in July 2018.

Just one month after her royal wedding, it appears that Meghan couldn’t get enough of wearing white if her outfit to her first Royal Ascot is anything to go by. For the visit, the newlywed wore a Givenchy shirt dress with a black belt made by the same brand.

Visiting Cheshire for the first time for her first solo outing with Her Majesty, Meghan looked elegant dressed in a cream-coloured Givenchy cape dress.

Stepping out of the car at the steps of St George’s Chapel, Windsor Castle, the bride looked like a princess in a white midi-sleeved wedding dress designed by Clare Waight Keller for Givenchy. The dress, which featured a boat-cut neckline, was teamed with a 16ft-long veil sewn with flowers that represented the 53 nations of the Commonwealth. For her ‘something blue’ on the day, her dress’ lining was stitched with a piece of blue fabric from the dress she wore on her first date with Prince Harry. The royal wore an art deco bandeau tiara, picked out by herself, Prince Harry and the Queen, which was made in 1931. The tiara features a brooch dating back to 1893 which was given to Princess Mary on her marriage to Prince George, the Duke of York.

For her wedding reception on 19 May 2018, Meghan was spotted exiting Windsor Castle in a high-neck fishtail gown by British designer Stella McCartney.